50 for Freedom hits the campaign trail

Since its Geneva launch in June, 2015, the 50 for Freedom campaign has staged events around the world – including London, Lusaka, Buenos Aires, Addis Ababa and Paris – to raise awareness about modern slavery and to promote ratification of the Forced Labour Protocol. Thanks to our supporters and partners we’re building a movement.

We teamed up with business leaders at a major conference on forced labour, organized by the Ethical Trading Initiative’s, Ethical Trade and Human Rights Forum. They discussed how international standards, better data and strong, innovative policies can help free those in modern slavery.

50forfreedom.org was launched at the conference. Meanwhile participant’s showed their support for the campaign by signing a signature panel. 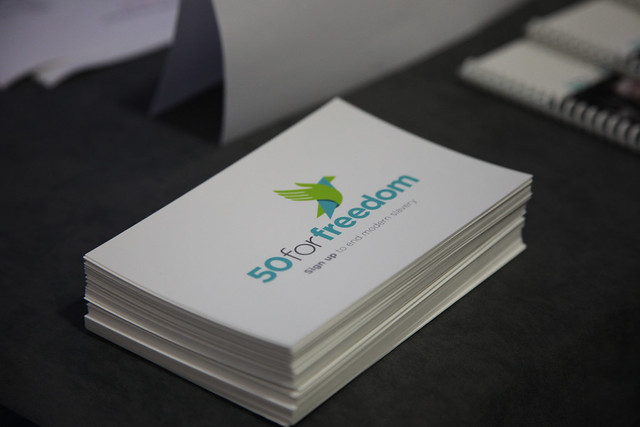 The President of Zambia, Edgar Chagwa Lungu was named as a champion for the 50 for Freedom campaign in Africa.  He opened a two-day conference on forced labour in the Zambian capital, Lusaka, attended by government, employers’ and workers’ representatives from 11 southern African countries.  At the end of the meeting, they called for the immediate ratification of the Forced Labour Protocol in Africa.

The 50 for Freedom campaign was promoted at the Trust Women conference in London – a major annual discussion on women’s rights, run by the Thomson Reuters’ Foundation. Beate Andrees, Chief of the ILO’s Fundamental Principles and Rights at Work branch, spoke about the importance of having a unified global estimate on forced labour.  The ILO sponsored a week-long journalism training workshop during the conference, focussing on the reporting of human trafficking and modern slavery.

The ILO’s Goodwill Ambassador on forced labour, Wagner Moura, took part in the launch of 50 for Freedom at an event in Argentina, along with some of the cast from El Patron – a major film on modern slavery. They pledged to set up an artist’s network in support of Labour Rights in South America.

Delegates to the ILO’s 13th African Regional Meeting in Addis Ababa renewed their commitment to ending modern slavery by signing a campaign signature panel. During the meeting, the final communique from the Lusaka conference, urging ratification of the Protocol, was presented.

France took an important step towards ratifying the Forced Labour Protocol at a conference co-hosted by the ILO and the national commission on human rights (CNCDH) at the French Parliament. Labour Minister, Miriam El Khomri, expressed her support for the 50 for Freedom campaign and confirmed the appointment of Gaetan Gorce as rapporteur for the legal process that will lead to ratification of the Protocol.

We are also grateful to inspiring individuals such as the Nobel laureate, Kailash Satyarthi, and the UN Special Rapporteur, Urmila Bhoola, who continue to support the campaign.